Intensifying hostilities in the north-west lead to increased casualties

Tension and violence have escalated rapidly in Idlib and surrounding Hama and Aleppo late April and early May. The UN Secretary-General was alarmed by reports of aerial attacks on population centers and civilian infrastructure resulting in hundreds of civilian deaths and injuries and over 150,000 newly displaced persons. On 16 May, several rockets hit the densely populated Neirab camp for Palestine refugees in Aleppo, killing at least ten civilians and wounding more than thirty. Among those killed were four children, of whom three are UNRWA students. Another child succumbed to her wounds several days later. UNRWA is monitoring the situation closely and is committed to providing humanitarian assistance in cases of major displacement or intensied hostilities to the 10,000-20,000 Palestine refugee estimated to be in the area.
Download File 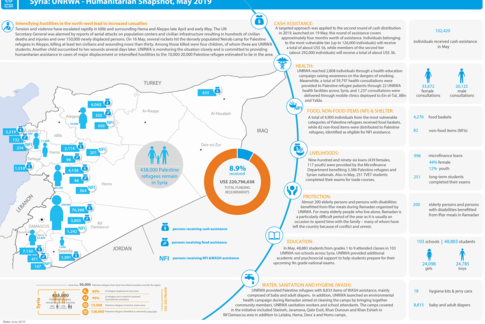