Home » Resources » Reports » Syria: UNRWA Operations and Achievements in 2015
Back to Resources

Syria: UNRWA Operations and Achievements in 2015

In 2015, UNRWA operations continued to be impacted by unpredictable and devastating armed violence and increasingly complex and deepening humanitarian needs. In response, the Agency continued to prioritize the provision of basic services and humanitarian assistance to support the 450,000 Palestine refugees estimated to remain in Syria, as they live through one of the worst humanitarian crises in decades. The year was marked by a severe escalation of violence in Yarmouk in April 2015, further compounding the extreme hardships of civilians trapped there, and suspending the Agency’s access to the area. In contrast, the return of some 7,200 Palestine refugee families to the town of Husseiniyeh after having been displaced for over two years was a welcome positive development. UNRWA was swiftly able to resume its services in Husseiniyeh and to support the returning refugees. 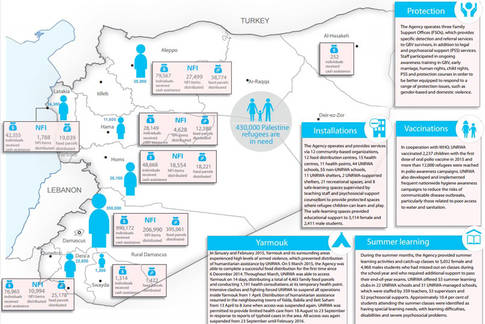