The United Nations system-wide policies prohibiting sexual misconduct (which refers to Sexual Exploitation and Abuse and Sexual Harassment) apply to all UNRWA personnel.

The Ethics Office has a number of responsibilities related to the Agency’s policies on protection from sexual exploitation and abuse (SEA) of beneficiaries and on the prohibition of discrimination, harassment – including sexual harassment – and abuse of power in the work context.

Sexual exploitation and abuse (SEA) of refugees and other members of the local community by our own staff is a gross violation of our mandate.

SEA occurs when an UNRWA employee abuses his or her position for sexual purposes. This includes, amongst other things:

UNRWA has a zero-tolerance policy on SEA. Sexual exploitation and abuse is serious misconduct and constitutes ground for the most severe disciplinary measures, up to and including summary dismissal. Click on the tab below to read the rules on SEA.

Know the SEA rules! There is no excuse.

Sexual harassment is any unwelcome conduct of a sexual nature that might reasonably be expected or be perceived to cause offence or humiliation to another, when such conduct interferes with work, is made a condition of employment or creates an intimidating, hostile or offensive work environment.

While typically involving a pattern of behaviour, it can also take the be a single incident. Both males and females can be either the victims or the offenders. Some examples include: 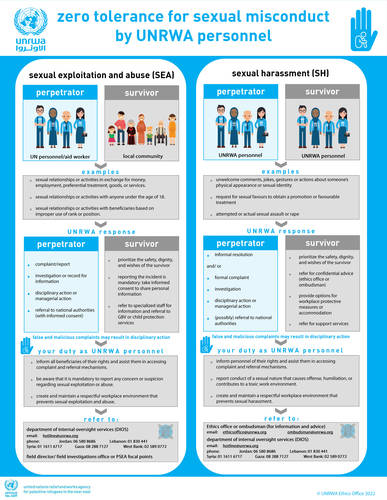 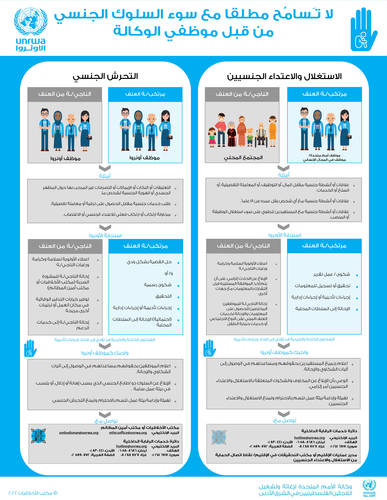 Humanitarian workers must report sexual misconduct. For more information please visit this page “How to Report”