Home » What We Do » Emergency Response

Over the past 60 years, UNRWA has always taken action to mitigate the effects of emergencies on the lives of Palestine refugees.

418,000
Palestine refugees in need of assistance in Syria

Over the past 60 years, UNRWA has always taken action to mitigate the effects of emergencies on the lives of Palestine refugees.

The operational context in which UNRWA works is challenging, ranging from relative stability in some host countries to more complex environments, including the ongoing armed conflict in Syria. The Agency works in close coordination with UN country teams in host countries to develop contingency and emergency response plans through the prevention, preparedness, response and recovery phases. Normally, these operations are of short duration, though protracted humanitarian emergencies may require a sustained relief effort.

UNRWA emergency response activities have historically centered on the occupied Palestinian territory (oPt) and Lebanon. We have worked to mitigate the impact on Palestine refugees of, among other conflicts, the hostilities of 1967, subsequent hostilities and the first and second intifadas. We have consistently worked to address specific vulnerabilities experienced by Palestine refugees in particular emergency situations as a result of conflict or deprivation of their human rights.

In Lebanon, nearly 27,000 Palestine refugees were displaced when the Nahr el-Bared Palestine refugee camp was destroyed as a result of fighting between the Lebanese Armed Forces and Fatah al-Islam in 2007. In 2009, UNRWA began reconstruction work in Nahr el-Bared, which has become the largest such project UNRWA has ever undertaken.

The ongoing conflict in Syria has become one of the most serious challenges UNRWA has faced in its six decades of working with Palestine refugees. As violence continues, its impact on Palestine refugees has increased,  displacing over 50 per cent of the registered refugee population, including over 270,000 within Syria itself. Despite the considerable challenges, the Agency continues to provide Palestine refugees in Syria and those who have fled to neighbouring countries within the UNRWA areas of operations, including Lebanon and Jordan, with emergency relief, health, protection and education services, along with continued microfinance to support the coping strategies of micro-entrepreneurs. 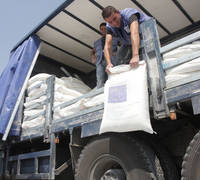 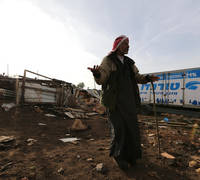 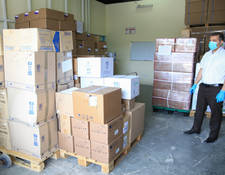