Home » What We Do » Microfinance

Microfinance
The UNRWA Department of Microfinance provides sustainable income-generation opportunities for Palestine refugees, as well as other poor or marginalised groups who live and work near them.

The UNRWA Department of Microfinance provides sustainable income-generation opportunities for Palestine refugees, as well as other poor or marginalised groups who live and work near them.

Many of the microfinance programme’s clients operate small, often informal businesses on the margins of the economy. They include fishermen, garage-owners, at-home seamstresses and vegetable stall-owners. We focus our microfinance operations on the poor urban areas where refugees often live, as these tend to be centres of commercial and industrial activity.

To create self-employment opportunities for youth between 18 and 30 years of age, our microfinance programme also provides start-up loans for young people looking to start their own businesses.

By lending to Palestine refugees, women, youth and other marginalized clients, the microfinance department supports the UNRWA human development goal of “A Decent Standard of Living.” The department organizes its programming with the strategic objective of providing its clients with “inclusive financial services and increased access to credit and saving facilities” that can provide them with new opportunities.

Microfinance In Our Fields

Gaza was the initial location for UNRWA microfinance activities, which began in 1991 with an initial capital fund of less than US $500,000. Several of our initiatives were also first launched there, including collective loans to groups of women entrepreneurs, in 1994, and microenterprise credit loans, in 1997. Over the twenty-four years since the first loans were given, Gaza has accounted for 25.5 per cent of our microfinance work, issuing a total of 121,248 loans worth US $158.7 million.

In the year before hostilities broke out in December 2006, Gazans received 12,000 loans,... END_OF_DOCUMENT_TOKEN_TO_BE_REPLACED

Home to eight branch offices, the West Bank has the most extensive network of the four areas served by the UNRWA Department of Microfinance. Since the programme’s initiation in 1996, clients of the West Bank have received 28 per cent of UNRWA cumulative lending – 135,360 loans worth a total of US $189.6 million.

The economy of the West Bank remains fragile and donors have an important role in the microfinance industry. UNRWA is one of the largest lenders in the market. In 2017, UNRWA granted 10,343 loans worth US $14.6 million.

We are particularly proud of our outreach to... END_OF_DOCUMENT_TOKEN_TO_BE_REPLACED

The instability and violence that have affected Syria since 2011 have seriously disrupted the country’s economy, making microfinance work in Syria increasingly difficult and precarious. To reach out to Palestine refugees, UNRWA completed the mapping survey of Palestine refugees in Syria, which has identified the new areas of the displaced clients and their households and enterprises. As it responded to the crisis, existing loan products terms and conditions were developed and a new loan product of Start-Your-Business (SYB) was introduced to meet the needs of internally displaced Palestine... END_OF_DOCUMENT_TOKEN_TO_BE_REPLACED

The microfinance industry in Jordan is well developed, highly competitive and profitable and, with four per cent of the market, UNRWA is one of the smaller operators. Nonetheless, we play an important lending role to support education, housing and small and micro-businesses. The UNRWA microfinance programme began lending in Jordan in 2003 and we believe that market outreach can grow much larger than it is now, particularly in these areas.

Our microfinance programme saw the most dramatic growth over the past five years by an average annual growth of five percent. In 2017, the total... END_OF_DOCUMENT_TOKEN_TO_BE_REPLACED 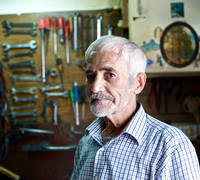 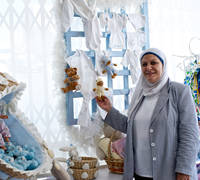 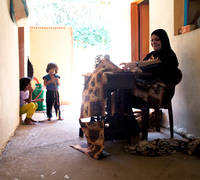 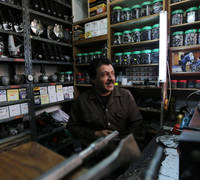 UNRWA microfinance loans help entrepreneurs in Syria grow their businesses
Statement by UNRWA Commissioner General, Mr. Philippe Lazzarini, to the UN General Assembly’s Fourth Committee
Reaching the Unreachable*
Nothing will stop me: How a Gazan barber is determined to return to his craft
About UNRWA
Evaluation of Emergency Cash Assistance, Syria emergency response