Khan Younis refugee camp is located about two kilometres from the Mediterranean coast, north of Rafah. It lies west of the town of Khan Younis, a major commercial centre and stop-off point on the ancient trade route to Egypt.

Fleeing their homes during the 148 Arab-Israeli war, 35,000 refugees took shelter in the camp. Most were from the Be’er Sheva area. Today, Khan Younis camp is home to 87,816 refugees. 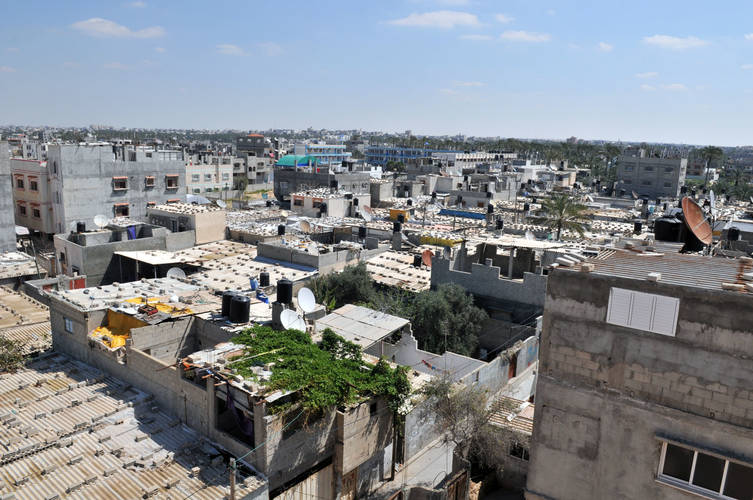 Life for nearly all refugees in the camp has become increasingly difficult because of the blockade on Gaza, with has caused a dramatic deterioration of socio-economic conditions, including ever growing unemployment and poverty rates. Fewer and fewer families can provide for themselves, leaving a staggering proportion of the population dependent on UNRWA’s food and cash assistance. As in other camps across the Gaza Strip, basic hygiene is another big concern with 90 per cent of the camp’s water supply being unfit for human consumption.

Overcrowding and a lack of living space characterize Khan Younis camp. Shelters are built in close vicinity and there is a general lack of recreational and social space. In many cases, residents have had to add extra floors to their shelters to accommodate their families, in some cases without proper design. Many live in substandard conditions. Together with the community, UNRWA has identified and implemented some camp improvement initiatives, including paving of some roads to facilitate the movement of refugees and people with special needs.

Khan Younis camp was established in 1948 to shelter around 35,000 refugees

16 school buildings, accommodating 19 schoolsو 13 of which on single shift and six operating on double shifts schools

Three health centres provide primary health services, including reproductive health and infant and child care, to refugees in the camp