Rafah refugee camp, established in 1949, is located in the southern Gaza Strip near the Egyptian border. Shortly after Rafah camp was created, thousands of refugees moved from the camp to a nearby housing project at Tel El-Sultan, making the camp almost indistinguishable from the adjacent city.

Rafah camp originally sheltered 41,000 Palestine refugees who had fled from the hostilities of the 1948 war. More than seven decades of displacement later, high population density is a major problem in the camp, with people living in crowded shelters along extremely narrow streets. 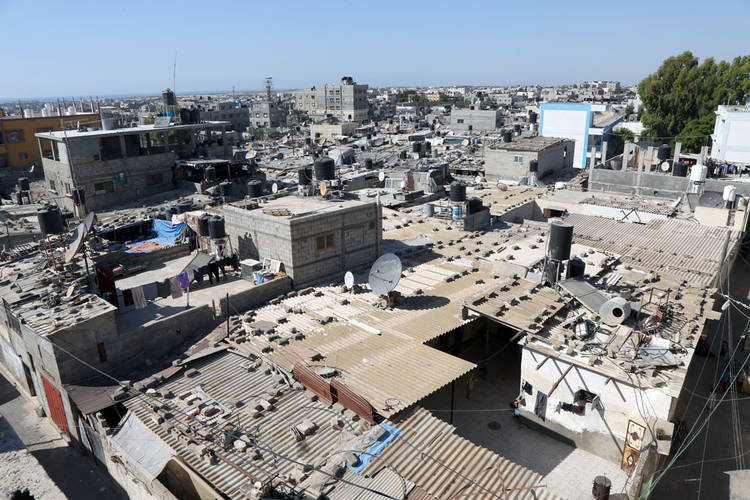 Smuggling tunnels connecting both sides of the Gaza–Egypt border have a long history, but especially between 2007 and 2013, there was a proliferation of smuggling via more than 1,500 tunnels to mitigate the impact of the blockade on Gaza. Due to its strategic location close to the Egyptian border, some Palestinians in Rafah camp benefitted from the ‘tunnel economy’, particularly following the wars of 2008/2009 and again in 2012 when construction material imports via the tunnels were essential to recover from the destruction caused during the military operations. In 2009, Egypt began the construction of an underground barrier to block existing tunnels, and in 2013-2014, Egypt's military destroyed almost all smuggling tunnels.

Despite the years of the ‘tunnel economy’, and increasingly so in recent years, unemployment and poverty levels in Rafah are very high, leaving a significant proportion of the population dependent on UNRWA food and cash assistance. In addition, 90 per cent of the water available to camp residents is unfit for human consumption, which is having an adverse effect on health and hygiene.

Export of carnations used to be a key element of the Rafah economy prior to the blockade. However, since the start of the blockade in June 2007, only a small number of truckloads of carnations have been permitted to be exported from Gaza.

PROGRAMMES IN THE CAMP

Overcrowding and a lack of living space characterize Rafah camp. Shelters are built in close vicinity and there is a general lack of recreational and social space. In many cases, residents have had to add extra floors to their shelters to accommodate their families, in some cases without proper design. Many live in substandard conditions.

It was established near the Egyptian border in 1949

11 school buildings of which 9 work as single shift and 6 operate on double shifts, accommodating 15 schools in total