Home » Where We Work » Lebanon

Over 470,000 refugees are registered with UNRWA in Lebanon, with 180,000 estimated for planning purposes to be residing in the country.  About 45 per cent of them live in the country’s 12 refugee camps. Conditions in the camps are dire and characterized by overcrowding, poor housing conditions, unemployment, poverty and lack of access to justice.

Palestinians in Lebanon do not enjoy several important rights; for example, they cannot work in as many as 39 professions and cannot own property (real estate). Because they are not formally citizens of another state, Palestine refugees are unable to claim the same rights as other foreigners living and working in Lebanon.

The conflict in Syria has forced many Palestine refugees from Syria to flee to Lebanon in search of safety. Nearly 29,000 of them are receiving UNRWA assistance in the country, including cash assistance, education, health care, and protection.

Read more about Lebanon Field Office Operation and about Palestine refugees from Syria in Lebanon.

We provide services in 12 Palestine refugee camps in Lebanon. UNRWA does not administer or police the camps, as this is the responsibility of the host authorities.
People 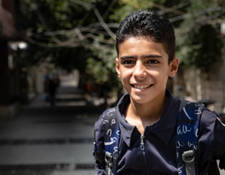