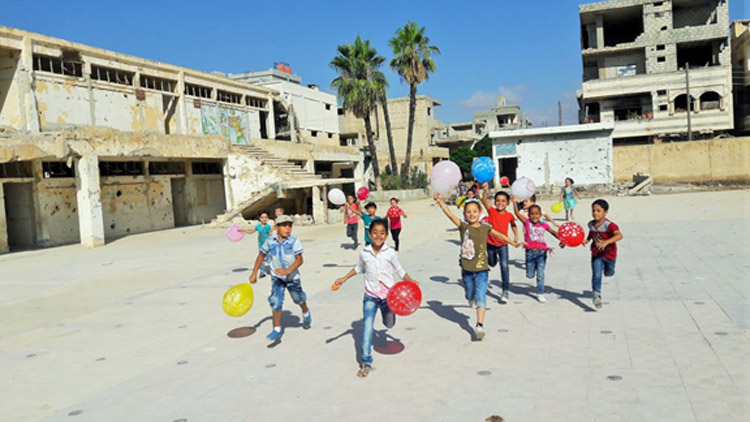 All UNRWA installations in Dera’a camp have been affected by the conflict.

Dera'a refugee camp is located inside Dera’a City, in southern Syria. Palestine refugees came to the Dera’a area in two waves in 1948 and in 1967.

The camp is divided into three parts. The older part of the camp was established in 1950-51 for refugees from the northern and eastern parts of Palestine following the 1948 Arab-Israeli conflict. Next to the old camp is the newer part, which was set up in 1967 for some 4,200 Palestine refugees who were forced to leave the Quneitra Governorate following the 1967 Arab-Israeli conflict.

The camp was initially set up on an area of 0.04 square kilometers, and it now covers an area of 1.3 square kilometers. In addition to the 10,500 Palestine refugees in the camp, there were more than 17.500 Palestine refugees living in the neighboring Syrian villages before the conflict. Most of them worked as farmers on Syrian-owned lands, while others were employed as wage laborers.

However, as the conflict unraveled, the camp became engulfed by violence and 90 per cent of the camp population had to leave the camp and seek safety in other areas such as Dera’a city, Damascus and Jordan. Most UNRWA services were moved to alternative premises in Dera’a city. Throughout the conflict, UNRWA has managed to maintain all service provision for Palestine refugees in South-Syria, including health and education, as well as the provision of cash and food assistance. This is a major achievement as access was often limited and required staff and assistance to cross active frontlines.

Dera’a camp and its surroundings returned to government control in the summer of 2018. The camp is now largely destroyed. UNRWA was able to return to Dera’a camp in November 2018 to conduct a needs assessment. Inside Dera’a camp, all premises including three school buildings and a clinic will need substantial repairs or complete rebuilding, meanwhile, UNRWA, was able to rehabilitate the Tiberias / Al Safsaf in Dera’a camp towards the end of 2019 and it was inaugurated in February 2020.

Like in other areas of Syria, displacement, unemployment, inflation, protection and security risks – including related to contamination by Explosive Remnants of War (ERW) - are among the main concerns shared by Palestine refugees and Syrians alike. The ongoing over 10 years long conflict has led to an increase in negative coping mechanisms, like early marriage, child labor and drug abuse as well as an increase in violence and psychological problems. UNRWA, despite financial constraints, has enhanced its efforts to conduct preventative and awareness raising activities and to provide psychosocial support through its schools and the community center. The already very dire situation is now compounded by the impacts of the COVID-19 pandemic and the dramatic decline of the economic situation. If not adequately addressed, poverty and protection concerns will increase and are likely to lead to a further deterioration of the socio-economic situation of the already very vulnerable Palestine refugee community.

In addition to the services provided inside Dera’a camp, UNRWA has six schools and a health center in the neighboring villages of Jelin and Mzeirib in the Western countryside of South-Syria. These have sustained minor damages since 2011 but continue to be in use. The situation in and around these villages remains tense until now.