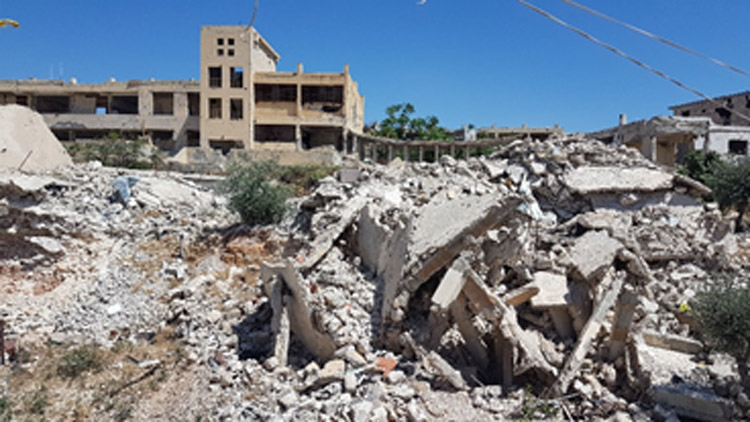 Ein el Tal is an unofficial Palestine refugee camp on a hillside 13 kms north-east of the city of Aleppo. The camp, also known as "Handarat" (after a nearby village), was established in 1962 on an area of 0.16 square kilometres. Most of the inhabitants are refugees who fled from northern Palestine.

Ein el Tal camp was once home to an estimated 7,000 residents. Under an UNRWA project in 2003 that aimed to reduce overcrowding in the densely populated Neirab camp, around three hundred families moved from there to newly constructed houses in Ein el Tal.

The camp is among the worst physically affected by the conflict, together with Yarmouk and Dera’a. In April 2013, armed groups entered Ein el Tal camp, forcibly displacing the entire population over a period of some 48 hours. The camp was a theatre of armed conflict until 2016, sustaining extreme damage. An estimated 70 per cent of the camp was completely destroyed.

In the summer of 2017, families started to return to Ein el Tal camp. Most of these families had been displaced to a collective shelter run by the government in Aleppo city. As of the end of 2020, around 120 Palestine refugee families are estimated to live in the camp, in addition to a few Syrian families. Basic infrastructure, including water, sewage and electricity, is lacking. As of 2020/21, considerable progress has been made in the restoration of water and electricity services by the ICRC and government authorities, respectively. Currently, rubble removal, restoration of services and the rehabilitation of UNRWA installations where possible are the main priorities for the camp.

UNRWA services provided in Ein el Tal are limited to a weekly visit by a mobile health clinic (now operating from a building), accompanied by staff from other programmes, including relief and social services and protection, when required, and daily bus transportation (2 buses) for around 75 students to and from the Mikhail Kashour government-donated school in Aleppo city (afternoon shift).

Protection and security risks – including related to contamination by Explosive Remnants of War (ERW) -, extreme poverty and unemployment are among the main concerns shared by Palestine refugees and Syrians living in the camp alike. The 10- year-long conflict has led to an increase in negative coping mechanisms, like early marriage, child labour and drug consumption, as well as an increase in violence and psychological problems. UNRWA has enhanced its efforts to do preventative and awareness-raising (including on ERW) activities, and to provide psychosocial support through the Mikhael Kashour school in Aleppo, the community centre in Neirab, and in the camp itself. The already very dire situation is now compounded by the impacts of the COVID-19 pandemic and the dramatic decline of the economic situation. If not adequately addressed, poverty and protection concerns will increase and are likely to lead to a further deterioration of the socio-economic situation of the already very vulnerable Palestine refugee community.

Programmes in the Camp:

*A number of so-called unofficial refugee camps were established over time by the host governments to provide accommodation for Palestine refugees. In all respects, refugees in official and unofficial camps have equal access to UNRWA services, except that UNRWA is not responsible for solid waste collection in the unofficial camps.