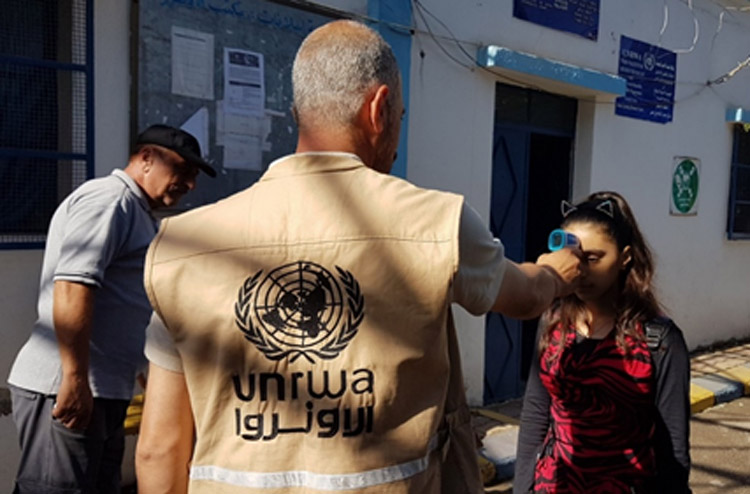 On the right, an UNRWA employee takes the temperature of a Palestine refugee entering the UNRWA Homes Area Office. The left shows a typical alley in Homs refugee camp. © 2020 UNRWA Photos.

The Homs Palestine refugee camp (also known as al-Aideen camp) lies within the town of Homs, 160 km north of Damascus, on an area of 0.15 square kilometres, adjacent to the al-Baath University. The camp was established in 1949, following the displacement of Palestinians during the 1948 Arab-Israeli war. Many of the refugees living in the camp are originally from the villages surrounding Haifa, Tiberias and Acre.

Before the crisis, the camp was home to close to 20,000 Palestine refugees. The majority of them used to work as laborers, local civil servants and vendors. However, at the start of the conflict in 2011, the original camp population reduced to around 9,000, before increasing again due to population displacements from other areas. Like in other Palestine refugee camps in Syria, a considerable number of families from central Syria, particularly also younger people, travelled to seek better opportunities and safety abroad.

Homs is one of the most severely affected cities by the conflict with large neighborhoods reduced to rubble.  The camp itself has remained physically unharmed, and displacement movements triggered by the conflict have caused the camp population to increase. Thousands of displaced Syrians and Palestine refugees from Homs itself, as well as other areas, have moved to the camp. The demand for UNRWA services has grown due to this influx. There are currently an estimated 12,000 Palestine refugees living in the camp, and over 2,000 in surrounding areas, plus several thousand Syrian nationals.

UNRWA facilities haven’t been directly impacted by the conflict, except from minor damages sustained indirectly in a number of school buildings. The last incident took place on Friday, 1 May 2020, affecting an UNRWA school which was hit by shrapnel when an ammunition depot outside the camp exploded. A classroom was damaged, but no injuries were reported.

Like in other areas of Syria, displacement, unemployment, inflation, protection and security risks are among the main concerns shared by Palestine refugees and Syrians alike. The 10-year-long crisis in Syria has led to an increase in negative coping mechanisms, like early marriage, child labour and drug consumption. UNRWA, despite financial constraints, has enhanced its efforts to provide preventative and awareness-raising activities and psychosocial support through its schools and the community centre. However, the already very dire situation is now compounded by the impacts of the COVID-19 pandemic and the dramatic decline of the economic situation. If not adequately addressed, poverty and protection concerns will increase and are likely to lead to a further deterioration of the socio-economic situation of the already vulnerable Palestine refugee community.