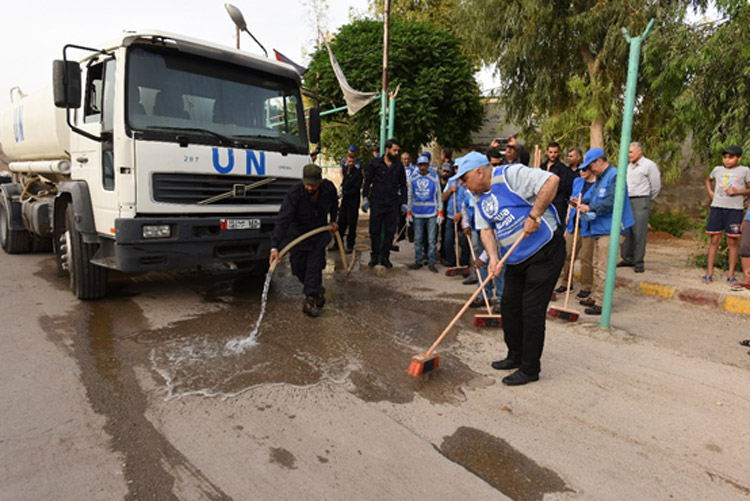 Jaramana camp is 8 km from Damascus on the road to Damascus International Airport.  The camp was established in 1948 and occupies an area of 0.03 square kilometres.  Historically, the camp has been inhabited by those displaced by the conflict in 1948, as well as Palestinians who had taken refuge in the Golan Heights and were displaced as a result of the 1967 Arab-Israeli hostilities.

Displaced Palestine refugees who could not afford renting a place took refuge in the three collective shelters opened by UNRWA in its schools that provided shelter to internally displaced persons (IDPs) until 2018. One of the largest UNRWA collective shelters was in al-Rama school, accommodating close to 300 Palestine refugees in both classrooms and tents in the school courtyard. In the summer of 2018, the three shelters were rehabilitated back into schools and are now in use again by UNRWA students.

UNRWA installations were not affected, but projectiles used to fall near the installations and inside Jaramana Camp. Due to the large number of IDPs in Jaramana Camp and the surrounding area, there was an increased demand on UNRWA services as the number of the refugees accessing the Agency’s services in the camp almost tripled.

This is not the first time that UNRWA operations in the camp were affected; the construction of a highway to Jaramana in 2006 meant that parts of the community centre, a health centre, a sanitation office, the newly installed sewerage network, urban development projects and schools had to be vacated. This was accompanied by a large number of refugee families being moved to a nearby new government housing project in the Palestine refugee gathering of al-Husseinieh or to shelters in the nearby villages and camps.

Many of the refugees worked as street vendors, government employees or in nearby industrial plants. Some inhabitants find work in the informal sector. The majority of women are domestic workers in Damascus to supplement family income.

Like in other areas of Syria, displacement, unemployment, inflation, and protection risks are among the main concerns shared by Palestine refugees and Syrians alike. The ongoing over 10 years long conflict has led to an increase in negative coping mechanisms, like early marriage, child labour and drug consumption, as well as an increase in violence and psychological problems. UNRWA, despite financial constraints, has enhanced its efforts to do preventative and awareness-raising activities and to provide psychosocial support through its schools and the community centre. The already very dire situation is now compounded by the impacts of the COVID-19 pandemic and the dramatic decline of the economic situation. If not adequately addressed, poverty and protection concerns will increase and are likely to lead to a further deterioration of the socio-economic situation of the already very vulnerable Palestine refugee community.