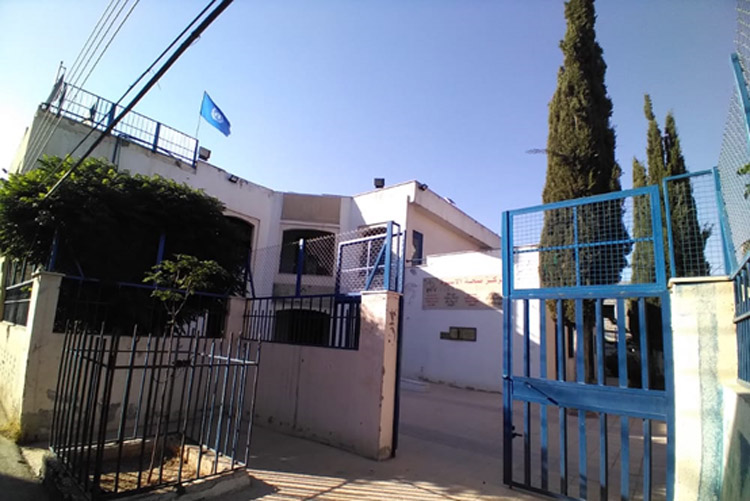 Khan Eshieh camp lies beside the ancient ruins of Khan Eshieh, 27 km south-west of Damascus. The ‘Khan’ historically served as an overnight shelter for trade caravans on the road between Damascus and the southwest, and in 1948, it provided shelter for the first refugees fleeing from the conflict in Palestine. The camp was established in 1949 over an area of 0.69 square kilometres. Subsequently, Palestinians who had taken refuge in the Golan Heights and were displaced as a result of the 1967 Arab-Israeli hostilities also moved into the camp.

Throughout the crisis, UNRWA strived to maintain support to Palestine refugees through limited services offered in its three schools, a health clinic, a community centre and a sanitation office. The Agency’s work was impeded by the fact that between 2013 and 2016, humanitarian access to Khan Eshieh was constrained, with no medical supplies being allowed into the camp. This lack of access meant that Palestine refugees travelled long distances to UNRWA distribution centres in Sahnaya gathering or Khan Dunoun camp to receive assistance.

Houses and infrastructure in the camp were severely affected including UNRWA installations. Two UNRWA schools and the community centre were almost razed to the ground. In December 2016, UNRWA was able to access the camp and able to begin rehabilitation of some of its installations. Residents have also slowly started to return, with the camp now accommodating 16,000 people.

Before 2011, the majority of Palestine refugees in Khan Eshieh camp were well educated and worked as teachers or civil servants. Others were employed as farmworkers on Syrian-owned lands and manual workers at the nearby workshops.

Like in other areas of Syria, displacement, unemployment, inflation, protection and security risks – including related to contamination by Explosive Remnants of War (ERW) – are among the main concerns shared by Palestine refugees and Syrians alike. The ongoing over 11 years long conflict has led to an increase in negative coping mechanisms, like early marriages, child labour and drug consumption, as well as an increase in violence and psychological problems. UNRWA, despite financial constraints, has enhanced its efforts to do preventive and awareness raising activities and to provide psychosocial support through its schools and the community centre. The already very dire situation is compounded by the impacts of the COVID-19 pandemic and the dramatic decline of the economic situation.