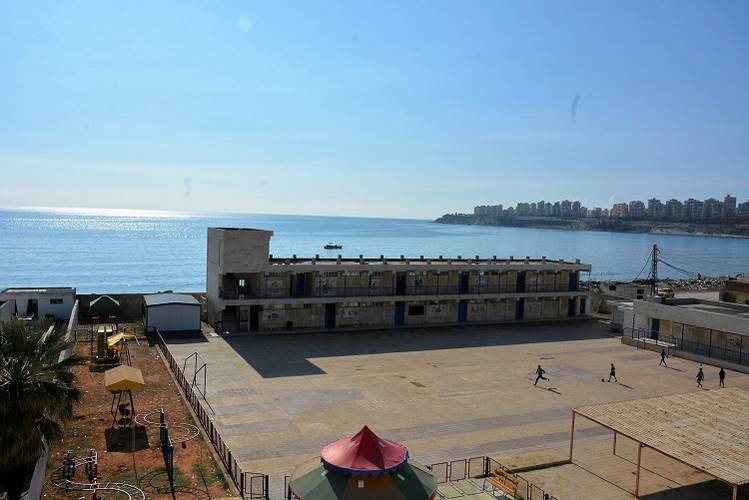 UNRWA installations in Latakia camp, located on the Mediterranean coast, have been unaffected by the conflict. © 2018 UNRWA Photo

Latakia camp is an unofficial Palestine refugee camp located within the city boundaries of Latakia on the Mediterranean coast. The camp was established in 1955-1956 on an area of 0.22 square kilometers. Most of the refugees originally came from the city of Jaffa and coastal villages in northern Palestine. Used to living close to the sea and many of them fishing families, the Palestine refugees settled in Latakia close to the Mediterranean.

Latakia camp has been largely unaffected by the hostilities, at least when it comes to physical damage, meaning that it has become a safe haven for Palestine refugees from Aleppo, Yarmouk and other places. Currently there are around 12,000 Palestine refugees living in and around Latakia, including around 9,000 in Latakia camp.

UNRWA installations have functioned throughout the conflict. In 2013, the micro-finance department opened a branch in Latakia, in addition to the already existing central area office in Tartous.

Despite its status as an unofficial camp, UNRWA started to pay for garbage collection in Latakia camp in 2015, which has improved the environmental health situation. UNRWA has also collaborated with the municipality to fix lighting in the camp. However, the humid climate requires frequent maintenance of buildings and infrastructure that, under the current financial situation of the Agency, cannot be guaranteed.

Before the conflict, residents of the camp were mostly civil servants or employed in shops. Fishing has also provided a small income for many refugee families. However, 2020/21 has seen an increase of existing challenges for the population in Latakia. Like in other areas of Syria, displacement, unemployment, inflation, protection and security risks are among the main concerns shared by Palestine refugees and Syrians alike. The 10-year-long conflict has led to an increase in negative coping mechanisms, like early marriage, child labour and drug consumption, as well as an increase in violence and psychological problems. Despite financial constraints, UNRWA has enhanced its efforts to do preventative and awareness-raising activities and to provide psychosocial support through its schools and the community centre. The already very dire situation is now compounded by the impacts of the COVID-19 pandemic and the dramatic decline of the economic situation. If not adequately addressed, poverty and protection concerns will increase and are likely to lead to a further deterioration of the socio-economic situation of the already very vulnerable Palestine refugee community.

*A number of so-called unofficial refugee camps were established over time by the host government to provide accommodation for Palestine refugees. In all respects, refugees in official and unofficial camps have equal access to UNRWA services, except that UNRWA is not responsible for solid waste collection in the unofficial camps