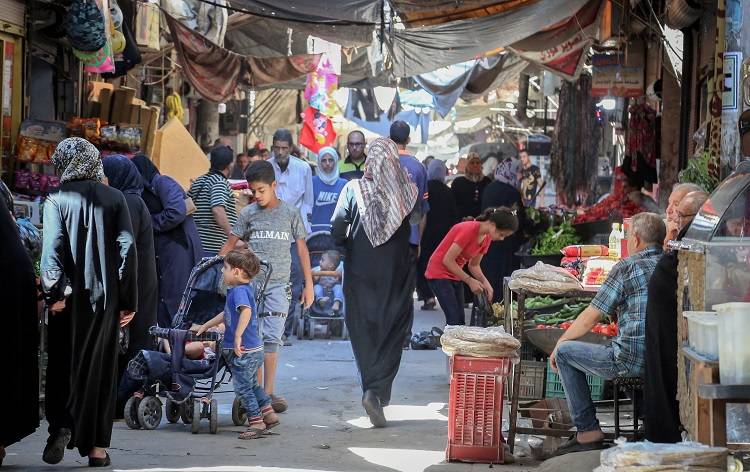 With nearly 18,000 registered refugees, Neirab camp is among the most densely populated camps. © 2018 UNRWA Photo by Ahmad Abo Zaid

It was established between 1948 and 1950 for refugees from northern Palestine on 0.15 square kilometers in and around army barracks constructed by the Allied Forces during World War II. The refugees found shelter in the barracks, which they modified as best they could to provide minimal privacy and to accommodate the needs of their growing families.

While UNRWA has been able to make essential improvements and maintenance to the barracks, the housing situation in Neirab remains deplorable. Poor and old shelters result in scorching temperatures in summer and freezing conditions in winter. Water leakage and rodent infestation also remain a problem for the refugees.

In the year 2000, prior to the crisis, UNRWA had embarked on a two-phase improvement plan, involving the Neirab and Ein el Tal camps. The first phase of the project included house construction in Ein el Tal camp for 300 families, to reduce overcrowding in Neirab camp. This phase also included the installation of water and sewage disposal networks, roads and pathways in the existing and the new residential areas. It was completed in 2010 and the 300 housing units in Ein el Tal were handed over to the Palestine refugee families. Paved roads allowed local transport to serve the camp for the first time.

In the second phase, the barracks area of Neirab camp was meant to be reconstructed for the remaining families. Open spaces were to be developed for the community’s commercial and recreational use. The works commenced in 2007 with the demolition of the first two residential areas. The reconstruction work in the first area was completed and the houses delivered to the refugee families.

However, the reconstruction of the second area and the entire reconstruction project was put on hold in 2011 due to the conflict. The gains in Ein El Tal camp were completely destroyed while the work in Neirab camp remains unfinished. Over 100 families whose houses were demolished in preparation for reconstruction continue to rent houses. UNRWA is currently paying rental subsidies for almost 90 of those families who are still eligible. The others are believed to have left Aleppo.

Before the start of the conflict in Syria, Neirab camp was home to more than 20,000 Palestine refugees. Like in other Palestine refugee camps in Syria, a large number of families and young people, have fled for safety or travelled to seek better opportunities abroad.  Displaced Syrians from other areas have also sought shelter in the camp, including from Ein el Tal, which was largely destroyed, as Neirab offers lower rent rates than other areas in and around Aleppo city.

The location of the camp near the military airport meant that the area was exposed to hazards, including mortars and shelling between the start of 2013 and the end of 2018. The camp spent seven months under siege by armed opposition groups (AOGs) in 2013, with no water, food, medicines or movement allowed into the camp. UNRWA services, including schools, mostly kept running during this difficult period due to the dedication of UNRWA staff.

The situation in and around Aleppo remained very tense until spring 2020, when the government regained control over the countryside nearby the city. Prior to that, on 14 May 2019, when families were gathering for their Iftar meals, several projectiles hit the densely populated camp, killing at least ten civilians, including eight Palestine refugees and four children, and wounding over thirty.

Approximately 18,000 registered Palestine refugees live in Neirab. The camp suffers from overcrowding and a lack of privacy.

Several thousand Palestine refugees currently live in Aleppo city, where services are provided in a health centre, a donated government school (afternoon shift) and an RSS office, in addition to the area office providing support and administrative services.

2020/21 has seen an increase of existing challenges for the population in Neirab and Aleppo. Like in other areas of Syria, displacement, unemployment, inflation, protection and security risks are among the main concerns shared by Palestine refugees and Syrians alike. The 10-year-long conflict has led to an increase in negative coping mechanisms, like early marriage, child labour and drug consumption, as well as an increase in violence and psychological problems. UNRWA has increased its efforts to do preventative and awareness raising activities and to provide psychosocial support through its schools and the community centre. The already very dire situation is now compounded by the impacts of the COVID-19 pandemic and the dramatic decline of the economic situation. If not adequately addressed, poverty and protection concerns will increase and are likely to lead to a further deterioration of the socio-economic situation of the already very vulnerable Palestine refugee community.

Programmes in the camp