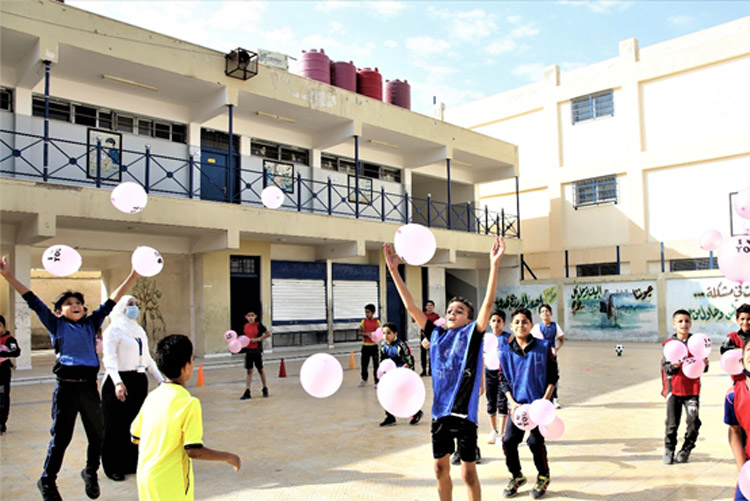 Sbeineh camp is situated beside Sbeineh town, 14 km south of Damascus and was established in 1948. The camp is situated on an area of 0.03 square kilometres. Historically, the camp has been inhabited by those displaced by the Palestine conflict in 1948, as well as Palestinians who had taken refuge in the Golan Heights and were displaced as a result of the 1967 Arab-Israeli hostilities.

In 2013, the entire camp population, which originally comprised of 22,600 residents, was displaced due to the military encounters that took place inside the camp. Many families were accommodated in UNRWA’s IDP shelters, and many are reported to have also fled the country. The camp remained closed to civilians for almost four years and houses and infrastructure were damaged in the fighting.

In September 2017, refugees were able to return to their homes. All UNRWA installations were in need of repairs. The agency, with support of funding from donors, focussed on rehabilitation of the damaged installations and by 2018, all UNRWA installations were rehabilitated, including three school premises, the sanitation office, the social workers’ office, the food distribution centre, the health centre and the community centre. The Agency also provided support to Palestine refugees through water trucking and carried out removal of rubble from the main streets and by lanes.

More than 16,000 of the original 22,600 residents who used to live in the camp before the crisis have returned to the camp as of March 2021 and another 4,000 live in the area around the camp and access UNRWA services in the camp. As of the 2021-2022 school year, there are more than 3,584 children enrolled at six UNRWA schools.

Previously, the majority of refugees worked in the nearby factories and industrial plants, or as day labourers on Syrian-owned farms. The majority of women were domestic workers in Damascus to supplement family income. However, due the conflict, such opportunities have dwindled and the unemployment rate is high.

Like in other areas of Syria, displacement, unemployment, inflation, protection and security risks – including related to contamination by Explosive Remnants of War (ERW) – are among the main concerns shared by Palestine refugees and Syrians alike. The ongoing over 11 years long conflict has led to an increase in negative coping mechanisms, like early marriages, child labour and drug consumption, as well as an increase in violence and psychological problems. UNRWA, despite financial constraints, has enhanced its efforts to do preventive and awareness raising activities and to provide psychosocial support through its schools and the community centre. The already very dire situation is compounded by the impacts of the COVID-19 pandemic and the dramatic decline of the economic situation.