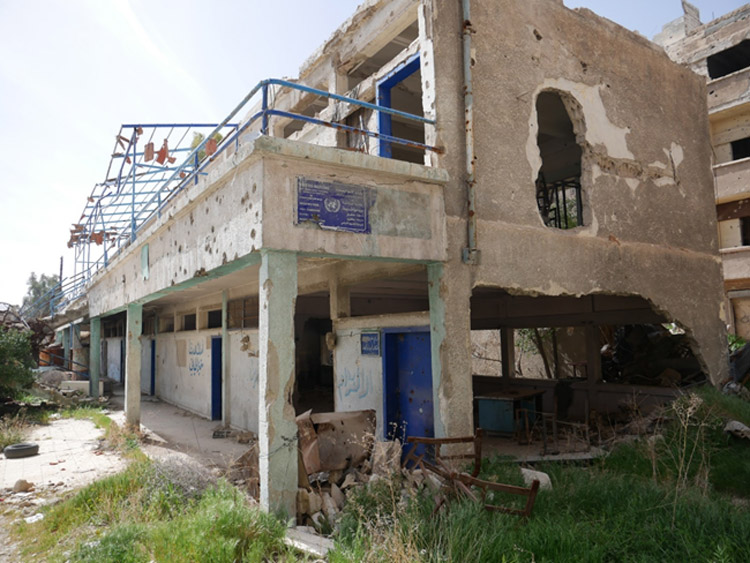 Before the eruption of the conflict in 2011, Yarmouk was home to approximately 160,000 Palestine refugees, making it the largest Palestine refugee community in Syria. Located eight kilometres from Damascus, it is one of three unofficial camps in Syria. Unlike other Palestine refugee camps and gatherings in Syria, it resembled an urban quarter. The original population of the camp and its surroundings constituted of 1,200,000 residents and the camp had a very good reputation and was considered as the capital of the Palestinian diaspora.

Yarmouk was established in 1957. It occupies an area of 2.1 square kilometres to accommodate refugees who were scattering in mosques, schools and other public places. Over the years, the refugees improved their shelters and added more rooms to them. Before the conflict, the camp was crowded with cement block homes, and densely populated. Three main roads lined with shops and crammed with service taxis and microbuses ran through Yarmouk.

In December 2012, fierce clashes erupted in Yarmouk, causing numerous civilian casualties, severe damage to property and the displacement of thousands of Palestine refugees and Syrians. The camp was under siege from July 2013, drastically restricting the entry of commercial and humanitarian goods. In January 2014, UNRWA had access to Yarmouk and conducted direct distribution to besieged Palestine refugees. The Agency continued distribution until April 2015, when armed opposition groups captured over 60 per cent of the camp, containing over 90 per cent of the remaining civilian population. This not only made UNRWA unable to carry out any distributions inside Yarmouk but also displaced most of the remaining 18,000 Palestine refugees and other civilians to the neighbouring areas of Yalda, Babila and Beit Saham (YBB). Later in 2015, UNRWA managed to access the remaining 6,000 Palestine refugees who remained in Yarmouk and YBB through cross- border missions to Yalda and continued until May 2016 when access was blocked. Almost all the remaining Palestine refugees who were living in Yarmouk who did not leave, left during the final government offensive in Yarmouk in April-May 2018, after which the government retook control of the camp.

The Agency conducted a damage assessment in October 2018 and found that all 23 UNRWA premises in the camp and nearby Hajjar al Aswad, including 16 school buildings, have been heavily affected by the conflict. This includes:

UNRWA SFO is gradually resuming some of its services based on access and humanitarian need, in response to Palestine refugees who have started to spontaneously return to their place of habitual residence. Since September 2020, UNRWA has been accessing the camp on a daily basis to provide mobile services inside the camp to families who have returned, including mobile health services, distribution of food and non-food items, as well as distribution of Explosive Remnants of War (ERW) awareness flyers. The Agency is also providing transportation to more than 200 students from the camp to nearby UNRWA-managed schools, hosted in Government schools.

The agency has developed a phased response plan for Yarmouk to provide basic and emergency services to Palestine refugee returnees in the short, medium and long term. Plans remain flexible and will be adjusted according to needs identified, number of persons returning to their habitual place of residence, Government approvals, availability of basic services, and available funding. UNRWA is working in collaboration with the wider Humanitarian Country Team (HCT), and Yarmouk has been identified as one of the priority areas for the HCT’s Area-Based Return Support (ABRS) plan. In February 2022, UNRWA received approval to undertake a multi-sectoral needs assessment for returnees to the Yarmouk camp, and which will be conducted during June/ July 2022.

NUMBER AND LIVING CONDITIONS OF RETURNEES

Since the end of 2020, Palestine refugees have been permitted to return to Yarmouk camp, subject to Government approval. Nearly 4,000 individuals [1,200 families] are estimated to have returned as of June 2022 – of these, approximately 800 families are Palestinian. Over 4,000 individuals (Palestine refugees and Syrians) are living in Yarmouk despite the lack of basic services, limited transportation, and largely destroyed public infrastructure. Regular access to electricity and water remains challenging. Many homes are empty with no doors, windows, or home infrastructure. Some returnees are using tarpaulin sheets to cover the windows because they cannot afford proper fixtures.

UNRWA in Syria is anticipating continued small-scale spontaneous return movements of mostly internally displaced persons to locations and camps that experience relative calm, especially in light of the current economic situation in Syria and increased challenges with the payment of rent. Returns to Yarmouk camp are expected to increase, particularly during the summer of 2022, with an additional 6,000 families who have been granted approvals, still yet to return. Like in other areas of Syria, protection and security risks – including related to contamination by Explosive Remnants of War (ERW) and falling debris - are among the main concerns in Yarmouk. The already very dire situation is further compounded by the impacts of the COVID-19 pandemic and the dramatic decline of the economic situation.

* A number of so-called unofficial refugee camps were established over time by host governments to provide accommodation for Palestine refugees. In all respects, refugees in official and unofficial camps have equal access to UNRWA services, except that UNRWA is not responsible for solid waste collection in the unofficial camps.